A look at Golden’s history 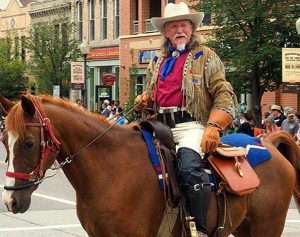 Checking out our neighbors down the hill

It’s no wonder that Golden, Colorado has a reputation as one of the West’s friendliest cities. Upon entering Golden’s historic downtown, visitors are enthusiastically greeted with a large, western-style sign arching across Washington Avenue, which reads, “Howdy, Folks! Welcome to Golden,” and proudly boasting the slogan, “Where the West Lives.”This iconic sign perfectly captures the spirit of Golden, a friendly and forward thinking city proud of its Western heritage.

Founded in 1859 and the territorial capital of Colorado from 1862 until 1867, Golden is an idyllic former gold-rush town nestled between two volcanic mesas and against the foothills of the Rocky Mountains – at its center lies Clear Creek, the lifeblood of its existence. Among other notable sites, it is home to the Coors Brewery, gravesite of William F. “Buffalo Bill” Cody, and the Colorado School of Mines, a highly renowned university committed to teaching and research related to engineering and applied science.

Originally named “Golden City,” it is believed to be named not only for being the supply center for miners of the region during the Pikes Peak Gold Rush, but also after Thomas L. Golden, one of the first prospectors to pan for gold in the area. In addition to the ample supply of gold in the region, Golden is also recognized for its coal, brick, and clay enterprises, which literally helped build the city from the ground up. The efforts of former Golden mayor, William A. H. Loveland, allowed the city to become a leader in providing the earliest railway system to connect with the mining towns in the mountains of Colorado.

Golden began as a small town with approximately 2,500 residents, but after the Second World War, it quickly grew in size geographically, economically and demographically. However, Golden retains a small town feel and sense of community through several long-standing traditions that preserve and honor the town’s western spirit, such as Buffalo Bill Days and Olde Golden Christmas.

Golden offers a splendid array of culture, shopping, history and recreation. Visitors can browse for artwork, explore historic landmarks and buildings, hike or bike the trails of Golden Gate Canyon State Park in neighboring Gilpin County and the Table Mountains, sip a cappuccino in one of the coffee shops lining Washington Avenue, and tour a variety of interesting museums for a look back in time to life on the Colorado frontier.

The extensive array of museums and attractions Golden has to offer is a source of cultural pride for this modest-sized city. The Golden History Museum & Park, owned by the city, offers visitors the chance to learn about the life and culture of Golden pioneers and the city’s distinctive past through insightful exhibits, old settlements and historic collections. Art lovers can enjoy beautiful works displayed within the Foothills Art

Center, a converted Victorian church. The outdoor train yard exhibit of the Colorado Railroad Museum offers visitors a hands-on experience and information about the compelling beginning of Colorado’s railway system (including railroad robberies), while the Bradford Washburn American Mountaineering Museum offers a look at the lifestyle and accomplishments of mountaineers. For a great view of the entire city and beyond, visitors can head up Lookout Mountain to visit the gravesite of famed showman, Buffalo Bill Cody, as well as tour a museum honoring his life and work. And of course, the world’s largest single site brewery, the Coors Brewery, is a “must see” and offers frosty samples of its many brews.

Before scheduling a visit to Golden, be sure to check out visitgolden.com for information on events, lodging and attractions.

END_OF_DOCUMENT_TOKEN_TO_BE_REPLACED

Where the dead get to tell their story By Jaclyn Schrock On Saturday, August 21, the Gilpin Historical Society held their annual Cemetery Crawl. Tickets allowed the shuttle of hundreds of guests from the Teller House parking lot to the Cemetery. Depending on v... END_OF_DOCUMENT_TOKEN_TO_BE_REPLACED