A little too much early morning excitement in Black Hawk 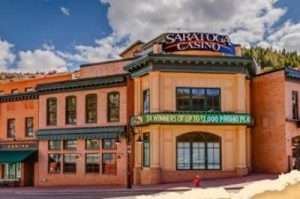 The month of September got off to an interesting start with an early morning lightning strike to a transformer on Main Street at Gregory Street in Black Hawk. When the Black Hawk Police Department dispatched the call-out to the Black Hawk Fire Department around 6:15 am, power was out for a larger part of the city, but primarily affected the first few buildings on either side of Main Street. But once the Xcel Energy team arrived onsite within 30 minutes, they were able to restore power to the Wild Card Casino and Bull Durham building, and then turned their full attention to the Saratoga Casino, the Gilpin Casino, and the Canyon Casino buildings. The buildings weren’t on fire per Fire Chief Chris Wooley, but the transformer was burning and everyone could see the column of black smoke. Timberline Fire was also called out to ensure everything was under control, and fortunately only the transformer was burned – there was no impact on any building. Before the transformer could be replaced and power turned back on, the Xcel team had to check all the electrical systems of the affected buildings, and they were still performing this arduous task at 4:30 on Tuesday afternoon after the fire departments had left.

Thanks to all the first responders that ensured this didn’t turn into a larger problem during these high fire danger times.

END_OF_DOCUMENT_TOKEN_TO_BE_REPLACED

Where the dead get to tell their story By Jaclyn Schrock On Saturday, August 21, the Gilpin Historical Society held their annual Cemetery Crawl. Tickets allowed the shuttle of hundreds of guests from the Teller House parking lot to the Cemetery. Depending on v... END_OF_DOCUMENT_TOKEN_TO_BE_REPLACED

Benefitting the county, schools, and much more By Don Ireland   This year marks the 30th anniversary of casinos opening in the former little mining towns of Black Hawk, Central City and Cripple Creek, Colorado. In those early years, smoking was allowed inside ... END_OF_DOCUMENT_TOKEN_TO_BE_REPLACED