A journey that every car enthusiasts should consider 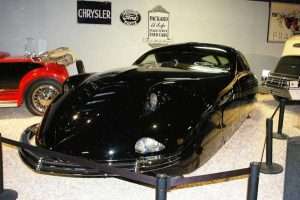 A journey that every car enthusiasts should consider is the best way to summarize a visit to The National Automobile Museum in Reno Nevada.

The collection of automobiles was started modestly by casino owner William F. “Bill” Harrah in 1948 with the purchase of a 1907 Maxwell and a 1911 Ford Model T. Harrah accumulated more and more cars over the years until he had a sizeable collection of cars from various manufacturers. The museum was opened up to the public in 1962 featuring 325 cars with most being one of a kind and prototype vehicles. The original location of the Harrah’s car collection was in Sparks, Nevada, then after the death of Bill Harrah in 1978, the museum and the 1,400 car collection it contained, was destined to fade off into automobile history. Through the efforts of many in the vintage car community, most of the collection was saved and the opening of the National Automobile Museum occurred in 1989 in downtown Reno with 175 cars.

The museum is divided into several different areas depending on the decade in which the cars were produced. Some of the early vehicles from around the 1900 to 1920 were steam powered. One such passenger steam powered bus had a distinct Colorado connection – the 1913 Stanley 810 Steam Mountain Wagon. The Stanley twins Francis E. and Freeland O. were an overnight success in the steam powered auto industry, and their car was nicknamed the “Stanley Steamer.” When Freeland developed health problems, he moved to Colorado in 1903 and built the Stanley Hotel in Estes Park. This is the very hotel that Stephen King made famous in the movie “The Shining” starring Jack Nicholson and Shelley Duvall. In order to transport passengers from Loveland to Estes Park, Stanley built a road and converted a 30 horsepower Stanley Powered Steam car into a twelve passenger bus to transport 10 paying passengers plus the driver and fireman. By 1908 there were seven Stanley Mountain Wagons carrying passengers up and down the dangerous and torturous winding road. The boilers were normally fired with petroleum, but in a pinch wood could be used to power the mountain wagon. A long hose with a steam powered or hand pump could fill the boiler from any stream or spring along the way making this the best available and most practical way for visitors to reach the mountain retreat. In 1909 the Mountain Wagons were available to the public for a price of $2,300 and were produced until 1916.

The museum’s 30’s and 40’s exhibit definitely had that era look, but there were some exceptions that had a style that was more futuristic. For example, there was the 1938 Phantom Corsair. This one-of-a-kind car was designed by Rust Heinz of the Heinz ketchup family. Heinz envisioned a vehicle that was state of the art designed using advanced materials, but shortly after the prototype was completed and tested, Rust died and so did his plans for a mass production. This black road hog had a steel-alloy and aluminum body with no running boards, fenders, or door handles. The doors opened with push buttons on the outside and on the instrument panel. The interior was padded throughout for the occupant’s safety and comfort. This particular car was featured as the “Flying Wombat” in the 1938 movie “The Young in Heart” starring Paulette Goddard, Janet Gaynor, Billie Burke, and Douglas Fairbanks, Jr. Originally the prototype cost $24,000 to build, with the production models projected to sell around $12,000 which equates to around $205,000 in 2018. Some say that this car inspired the concept of Batman’s “Batmobile.” If that is true or not, one thing is for sure, the design was definitely ahead of its time.

Among the many exhibits is one that is a throwback from the ‘60’s. Anyone who has ever collected “Rat Fink” trading cards or possessed some of the early Hot Wheel cars knows the name Ed “Big Daddy” Roth. He was the first to put illustrations on T-shirts and sweat shirts with a felt pen in the late 1950’s. In order to promote his T-shirt business, Roth in designed and built a limited number of real life bubble-canopy hot rods. These cars were known as the “Beatnick Bandit,” “Outlaw,” “Rat Fink,” “Road Agent,” and others. They were built on shortened frames from vehicles available at the time. The Beatnick Bandit for example, was built on a shortened 1949 Oldsmobile chassis and running gear. The Olds overhead valve design engine was given a GMC blower and twin ford carburetors. Mattel Corporation bought the rights to the designs in the mid 1960’s and produced millions of the Big Daddy inspired pocket sized cars known as Hot Wheels and introduced them as part of their 1968 original design. In 1968 Hot Wheels sold for 55 to 79 cents. With this being the 50th anniversary of the original Hot Wheel, current online prices for those original Hot Wheels cars range from $30 to $90.

Rat Fink is another inspiration of Ed Roth. The oversized green rat with gnarly teeth driving his radical hot rod sporting an oversized shifter was on posters, T-shirts, and trading cards. Rat Fink became an icon in the American hot rod scene especially in southern California and the west.

The National Automobile Museum contains so many cars, trucks, peddle cars, and stories, that it would impossible to feature all the exhibits in one article. If any fan of the automobile finds themselves in the northern Nevada area, a short jaunt to downtown Reno is definitely worth the trip. The museum is open Mon. – Sat. from 9:30 a.m. to 5:30 p.m., and Sun. from 10 a.m. to 4 p.m. Admission is $12 for adults, $10 for seniors, and $6 for children 6 to 18 years. Children age 5 and younger are free and parking is free at the museum parking lot. For more information visit their website at http://www.automuseum.org.

END_OF_DOCUMENT_TOKEN_TO_BE_REPLACED

Where the dead get to tell their story By Jaclyn Schrock On Saturday, August 21, the Gilpin Historical Society held their annual Cemetery Crawl. Tickets allowed the shuttle of hundreds of guests from the Teller House parking lot to the Cemetery. Depending on v... END_OF_DOCUMENT_TOKEN_TO_BE_REPLACED