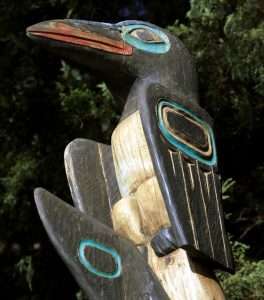 First discovered by Tlingit peoples over ten thousand years ago, what would come to be named Sitka, Alaska, has been continuously inhabited by the Tlingit for the last fifty centuries. Called “Paris of the West,” Russia controlled the area in the early 1800s when it was the dominant port in western North America. Sitka acted as Capital of the Alaska Territories from 1884 until 1906, when the seat of government moved to Juneau. The Pacific Coast Steamship Company began running tourist cruises to Sitka in 1884, and by 1890, five thousand people visited each year. With access only by airplane or boat, cruises remain an affordable and popular method of getting there, although just one day off a cruise ship won’t do the town and surroundings justice. Once on the ground, Sitka offers a wide selection of activities for the adventurous traveler.

On wildlife sightseeing boat tours you’re likely to encounter sea otters, seals, puffins, auklets, murres, eagles, and whales. Snowcapped mountains encompass Sitka Sound as you glide past craggy islands. Sea kayaking provides a water-level experience. Hiking trails lined with totem poles take you to a salmon-choked Indian River. The truly physically fit might want to summit dormant volcano Mount Edgecumbe. The onion-shaped domes of the St. Michael’s Cathedral, an actively-practicing Russian Orthodox Church, dominate the center of town. Mossy, lichen-encrusted gravestones that date back 200 years are worth a look at the Russian Cemetery a few blocks away. Contemplating the ocean view while dining on king crab legs at the Channel Club is a satisfying end to a pleasurable day.

For all the things that Sitka offers, first and foremost at its core is fishing. Eighteen percent of its population makes at least part of their living from the industry. Salmon run thick from the end of May until the beginning of September. As an added bonus, halibut, ling cod, and rockfish readily bite throughout the year. Big Blue Charters book fishing packages that include ten-hour fishing days, lodging, meals, licenses, and 50 lb. processed, flash frozen, and vacuum-packed boxes of fresh fish to take home with you. Accommodations are at Totem Square Hotel conveniently located by the docks where you’re picked up in the morning. A buffet-style breakfast is served at 5 a.m.

Our first three days were spent angling Sitka Sound. “Mooching” is the technique we employed where a herring is attached to a double hook rig, weighted and slowly lowered to where the sonar says fish are present. Reeling up ten feet at a time and pausing, the process repeated itself. Sometimes the salmon would take the bait on the drop and the rod would straighten which was hard to detect for me as a beginner. Our captain and guide, Bob, says that half of the hits come while lowering the herring. Todd, an experienced commercial fisherman and owner of fishing vessel Sea Star, pulled in three times the number of salmon than the rest of us. If you dropped the offering to the bottom you were more likely to land a halibut, highly delicious black rockfish and yellow-eye rockfish, or quillback rockfish. Halibut slot restrictions require that only one halibut can be harvested less than 44 inches, or equal to or greater than 80 inches. I caught two at 45 inches that had to be thrown back. The coho salmon averaged eight pounds of which we each caught two or three a day. Forty-five and fifty-five pound ling cods were hooked and released in accordance to regulations. A beautiful yellow-spotted Chinese rockfish was also released. On my third day, I landed my first Alaskan king salmon that weighed twelve pounds.

Fifteen to twenty times a year the ocean winds subside enough to calm the seas for sport fishermen and allow access to a bay on the Pacific Ocean that holds vast numbers of salmon. A forty mile run from Sitka, Big Blue Charters just discovered it five years ago. On my fourth day we headed towards the seldom-fished bountiful bay. The two hour boat ride put us on the spot as we let down our lines. Moments later I hooked a coho. Another fellow fisherman had one on, and then the guy next to him! This continued for more than an hour until everyone in the party had their limit of six cohos apiece. Light-footed Captain Bob netted and unhooked fish, re-baited hooks, uncrossed rods, gutted the catch, and stowed salmon in a blur of perpetual motion. During the frenzied slaughter I was at times splashed with blood from the wriggling fish in the holding bin. Since the salmon attacked the bait almost as fast as it could be presented, I opted to speed my drop to try to reach just above bottom in hopes of a bigger salmon. At 135 feet, I got a decent strike. Hard to determine the size of the fish at first, when a salmon is hooked, it instinctively races to the surface. Reeling as fast as I could, I finally caught up with it and set the hook more firmly. The custom-made “Whopper Stopper” rod bent to the water and I pulled against the fish, losing and gaining back line in incremental intervals. Netted, gaffed, and onboard the king salmon weighed seventeen pounds.

END_OF_DOCUMENT_TOKEN_TO_BE_REPLACED

Benefitting the county, schools, and much more By Don Ireland   This year marks the 30th anniversary of casinos opening in the former little mining towns of Black Hawk, Central City and Cripple Creek, Colorado. In those early years, smoking was allowed inside ... END_OF_DOCUMENT_TOKEN_TO_BE_REPLACED

Benefitting the county, schools, and much more By Don Ireland   This year marks the 30th anniversary of casinos opening in the former little mining towns of Black Hawk, Central City and Cripple Creek, Colorado. In those early years, smoking was allowed inside ... END_OF_DOCUMENT_TOKEN_TO_BE_REPLACED