A Couch for Llama 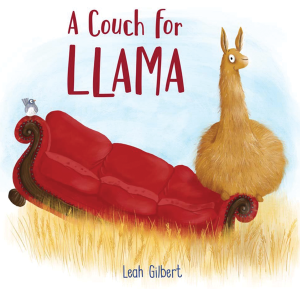 “The Lago family really loves their couch. It’s perfect for reading, snuggling, playing, and jumping. But all good things must come to an end, and one day, the family realizes the time has come to replace it. As they drive home with their brand-new couch, though, it falls off the top of their car with a “whoosh” into a field, where a llama tries to make sense of this new thing. The coach doesn’t talk, it doesn’t taste good, and it doesn’t budge. But the llama soon realizes how comfy it is. Can the family get its furniture back and keep llama happy, too?”
Gilbert visited with the traditional and Montessori students at Gilpin, who enjoyed the tale and its surprising conclusion. The group compared the activities shared by the Lago family in the book to what people do in their cultures with their families. The children were really excited about the story and were eager to comment on how they loved llamas and other animals they had seen.

Gilbert told the kids how she became an author and illustrator and shared how she came up with her idea for “A Couch for Llama.” Starting with her first thumbnail sketches, she used a Power Point presentation to take the students from the idea phase to the finished book. The kids even got to see some of the illustrations that didn’t make the final cut.

Gilbert also connected to the youngsters on their level by showing them drawings she did as a first and second grader.

Meghan DeGuelle, who formerly taught at Gilpin, made it possible for the author’s visit. DeGuelle had been at the Tattered Cover Book Store, saw Gilbert’s book, and liked it. Gilbert was part of the Tattered Cover’s visiting author program, and as she was local, DeGuelle made arrangements for Gilbert to come to Gilpin.

“A Couch for Llama” is Gilbert’s first book, published in February 2018, and its inspiration came from the author’s everyday life. She used to work in Boulder. On her way to work each day, she would drive past some llamas in a field. One day, she didn’t see the llamas, but she did see a couch sitting on the side of the road. Gilbert put the two images together and came up with the idea for her book. She developed the plot in her mind, then began the process of creating the drawings and story line.

“I did the art and the writing together,” Gilbert related. “I first drew some quick sketches and then wrote some lines as I went, just playing around with it.”

The teachers appreciated having their students see the necessity of the revision process. The children saw the very early “Couch for Llama” sketches, followed by more developed ones and some of the final sketches.

“I had to change it quite a bit and revise it to make things better.”

She didn’t touch on the publishing process, but talked about how she works with an editor and an art director who help her make the finished work the best it can be.

“A Couch for Llama” is published by Sterling Children’s Books and is sold on Amazon, at the Tattered Cover, other local bookstores in Denver and throughout Colorado – most anywhere books are sold.

Gilbert explained that although Sterling Publishers is based in New York, she didn’t have to travel there regarding her book project. Everything is digital now, she advised. Authors and illustrators come from anywhere. Gilbert has an agent based in Seattle to whom she sends her work. The agent then sends it to publishers.

Gilbert always wanted to be a children’s author and illustrator. Growing up in a small Wisconsin town, she was always drawn to art and books.

“Books were always big in my family,” she affirmed. “We would be at the library a lot. My whole family loves reading, although I am the only one who is specifically artistic. I always really loved art, and my family encouraged me to pursue it.”

She earned her bachelor’s degree in illustration and graphic design from Grace College in Winona Lake, Indiana, then moved to Colorado, where she worked as an illustrator and designer for ten years at Blue Mountain Arts. She lives in the Denver area with her husband and infant son.

As a Christian, she said her work is influenced by her beliefs, although it isn’t specifically geared for religious markets and doesn’t contain religious themes.

Gilbert indicated that a special mindset is necessary to create stories for children.

“You have to be able to relate to kids for sure and be able to know what appeals to them – get into their minds a little.”

Since she was young, Gilbert has been able to relate to children.

“I did babysitting. My mom was a child care provider, so there were always kids around. My sister is now a children’s librarian. So my whole family was geared to kids and books.”

END_OF_DOCUMENT_TOKEN_TO_BE_REPLACED

Benefitting the county, schools, and much more By Don Ireland   This year marks the 30th anniversary of casinos opening in the former little mining towns of Black Hawk, Central City and Cripple Creek, Colorado. In those early years, smoking was allowed inside ... END_OF_DOCUMENT_TOKEN_TO_BE_REPLACED