A Celtic barn dance in Gilpin 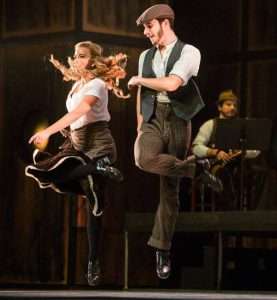 Come join in for some fun!

Are you thinking of a neighbor’s home or barn being raised, a wedding, graduation or birthday to celebrate with local folks for a barn dance? That is the way Jefferson and Gilpin Counties often held festivities since the late 1800s, usually in a one room schoolhouse, or later in the school gym.   Are you craving the sharing of good food and swapping funny, local stories between sets of live music danced in traditional fashion with a caller to guide us through the steps together? Are you ready to laugh a lot? Is your foot start to tap hearing the fine musical licks playing in your head?

You just might find lonely regrets if you miss out on our own Ceili Dance and Pot Luck Dinner held Sunday afternoon, from 4-6 p.m. on March 31. Your friends and neighbors will be stepping out to live music at 971 Highway 46. It is just around the curve from Base Camp, across the road from Gilpin Fair Grounds and Recreation Center. Turn where the reflector cross is, going up the driveway to Christ the King Community Church Black Hawk.

What is a Ceili, or Ceidhlih?

No matter how you spell it, a ceili (kay-lee) is a social gathering reminiscent of the American barn dances during the last two centuries. Typically organized in Ireland and Scotland, although there are similar gatherings in the other Celtic nations of Wales, Mann, Cornwell, Brittany, and Galicia – the event focuses on food, dance, and story-telling. Dances are open to all ages provided you are tall enough to work with a partner, and after a short description or practice for those who are unfamiliar with the steps, each dance is “called” as the music is played. After several dances, it is common to take a short break to exchange tall tales and funny stories while eating good food.​

Irish step-dancers and Scottish highland dancers perform some pretty fancy steps, and most Americans become familiar with these during Riverdance Company tours, or medieval and Renaissance festivals that showcase bagpipers. While it is true that these fancy steps can be used in ceili dances, it is not necessary in order to enjoy the dances. Most dances can be walked, or you can use a sort of playground gallop. In fact, your lungs may love you more if you save the fancy stuff for the feisanna (fesh-ann-ah) or dance competitions.​

​Why is CTK hosting a Celtic dance?​

Celtic music is the mother of bluegrass and country music that is popular in the mountains, and because not everyone plays in a band, it just makes sense to invite them to a dance! Christ the King has a mission to create an authentic Christian community that effectively reaches out to unchurched people with love, acceptance, and forgiveness. One of their core values is community, and one of their priorities is outreach. When you dance, you can’t help but reach out to someone!​

​What do I need to know before I come?​

You need to know your left from your right, and how to shake hands with someone else. If you have ever done square-dancing, you are already ahead of the game. And speaking of games, if as a child you ever played London Bridges Falling Down, or Red Rover, or Catch the Tiger by the Tail, then you know several formations used in many of the dances.​

What do I need to bring?

Bring a potluck meal to share with the rest of the community, and wear sturdy, comfortable shoes that allow you to jog on carpet. Bring a willingness to laugh at yourself. Most participants will be learning something new, but as long as we all approach it with open hearts, we can have fun.

National Barn Dance (NBD) may have been talked about in your family as it was in mine. My folks were born around the time WLS AM radio show aired clearly, beginning in 1924-1968 from Chicago, Illinois reaching far and wide. NBD was a radio show, like most in its day, broadcast live. I know my folks learned to dance from music that came from the radio, or Victrola. Regular artists included: Gene Autry, Red Foley, Lenny Lou Carson, The Williams Brothers (included Andy Williams), Arkansas Woodchoppers, Hoosier Hot Shots, and so many more.

Those early news, commercials, and weekly shows featuring music and dramatized stories all went out over the airwaves from a studio with live musicians, narrators and news castors. Families, friends and neighbors gathered where the antenna receiver brought to humble living rooms radio shows to be heard together.

National Barn Dance, The Old American Barn Dance with Bill Bailey, and ABC Barn Dance brought the music people loved to hear on American television. Even Henry Ford, our original auto maker was very fond of going to the Barn Dance. Rich and fancy folks may have had elegant balls and restaurant celebrations, but the common folks had barn dances.

Folks sought to cling to the traditions of barn dances. Families having grown up with the barn dance for the common folks, cherished this fun, fellowship and food. The American Barn Dance faded after 1899 with electricity, telephones, horseless carriages and industrialized cities squeezed out the joys of rural celebrations.

The tradition in America to celebrate with music, dancing and food as we know the Barn Dance, is said to have come with the many immigrants who settled and spread west. Nearly every culture in the world celebrates in their own clothing with music, dancing and food, most also include the art of oral storytelling. With so many cultures included in the communities that spread across this land, the melting pot of American culture began.

The Barn Dance is recognized as any kind of dance including folk or traditional music with traditional dancing, in America. It was typically found associated with a family or community-oriented event, usually for people who do not normally dance; like farmers and laborers. That is why there is a caller, to guide group, easy dances that everyone can join in. Babysitters were not available, so a Barn Dance included the whole community of all ages.

The media of the 1930-70’s presented the Barn Dance so we recall the image of backwoods, illiterate folks in tattered clothing with overalls only strapped over one shoulder, straw hats, corn pipes and simple swishing skirts on the bare foot gals. But truly, Barn Dances, which also developed the American Square Dance, consisted of fine, educated people who are just down to earth, family oriented, so often bringing their religious music and stories with them.

This nearly forgotten style of community gathering has seen revival of good ol’ fun. No longer is the Barn Dance the only reason to gather. It is more common to find such events found in parallel with rodeos or other community celebrations. In the 21st century we enjoy not only county music and line dancing, but also a revival of Square Dancing and Ceili Dances. My childhood memories include going with my parents to the Friday or Saturday night Square Dancing at the YMCA. Being too small to be a partner, I got to watch and learned how to keep from getting stepped on. My husband danced standing on a parent’s feet, in-between them in a Morrison bar. We all grew up dancing with the old familiar tunes, typically in 4/4 time, played by talented folks who could drop their differences to play and dance together. Some of the dances called at a “Barn Raisin’ party” or “General Ruckus” included: Waltzes, Virginia Reels, Buck dancing, Breakdowns, Corn Husking dances, Jigs, Schottische, and Quadrilles.

To recognize the festivities of the Ceili Dance and Potluck this month at CTK, we see it as a barn dance of our local traditions brought by the Cornish miners who came to Gilpin County in the 1860-90s. They were already experienced in working hard rock mines that few on this continent were experienced with. We are privileged to have an extensively experienced Ceili dance authority as caller coordinating our event.

Ceili Dance (I have to think of my niece Kayleigh to pronounce it correctly) can be pronounced from the Scottish Gaelic or Irish ways to mean the same thing. The term is said to descend from the Old Irish word for “companion” in its singular form. It later became “ceilidhe” which means “visit” in Gaelic.

Cornwall and Whales regularly enjoyed traditions similar to Ceili, which included the English Country Dances. Over time these have fused into what continues today in the rural areas more than the Irish and Scottish cities where discos and nightclubs prevail. Yet, even modern Ceili are revered as a social gathering, often facilitating courtship and prospects of marriage for young people while celebrating community with older and younger ones. Dances often have sets of four couples as in a Square Dance. With brief instructions for dance moves and calls, couples often exchange places or partners within the square or set. Full group circle dances are also included, so a couple may be part of the whole circle, exchanging partners to dance with everyone before returning to your original partner.

With time and place set with local live musicians, food and beverages, the Ceili event was set.  Stories, tales, poems, ballads, and rehearsed songs and proverbs remain a critical part of the traditions.

It is clearly the influences of Celtic and many other traditions, perpetuated by the influx of immigrants to North America which shaped the American Barn Dance.

We look forward to a late March celebration of fun, food and fellowship in festive Celtic tradition as America has come to celebrate the month of March in remembrance of Irish ways. Bring along your dancing shoes, a dish to share, fiddle, flute, tin whistle, accordion, or hammer dulcimer to resound with traditions. Please call 303-582-2095 for more information.

END_OF_DOCUMENT_TOKEN_TO_BE_REPLACED

Benefitting the county, schools, and much more By Don Ireland   This year marks the 30th anniversary of casinos opening in the former little mining towns of Black Hawk, Central City and Cripple Creek, Colorado. In those early years, smoking was allowed inside ... END_OF_DOCUMENT_TOKEN_TO_BE_REPLACED

Benefitting the county, schools, and much more By Don Ireland   This year marks the 30th anniversary of casinos opening in the former little mining towns of Black Hawk, Central City and Cripple Creek, Colorado. In those early years, smoking was allowed inside ... END_OF_DOCUMENT_TOKEN_TO_BE_REPLACED