A burro walked into a bar… 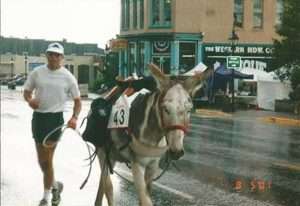 We used to have a burro race in Central City many years ago. I participated several times there. One year a racer was kicked in the chest by his burro, rupturing one lung. He finished the race and collapsed at the finish line, requiring hospitalization for a week.Another time, a racer’s burro ran off the road dragging the racer down the side of a very rocky hill side. At the finish line we all wondered what had happened to that racer and compared mental notes about when we last saw him. We jumped in a car, returning to the spot we had last seen him, finding him trying to climb the hill side with a really bad case of road rash.

So many memories from burro racing!

Here is a humorous story about trying to make a burro do what you want on race day.

Back on August 5, 2001, the day began clear and cool with the promise of scattered thunder storms for the afternoon. Not bad I thought, I’ve seen way worse forecasts for the Boom Days race, and I’ve lived through some harrowing thunderstorms, with hail and lightning coming at regular intervals as I’ve run up and down Mosquito Pass.

I began burro racing because we moved next door to Joe Glavinich in 1989, who had won the race more times than anyone else. He watched me leave our new house and go jogging in the morning, stopping me on my return and asking if I ever thought about racing burros. “What’s that?” was my reply. He told me some of his stories and I was hooked.

Today would be my ninth attempt at completing the race. Up to now I’ve finished eight times, and I’m hoping for that ninth finish. The week before I ran the Fairplay Burro Race, running to a first-place finish in the 16-mile short course, and prior to that a disappointing 10th place finish in Frisco. After the Frisco Burro Race, I was quoted in the paper saying, “I think I ran an extra two miles today because every turn I took my burro Dakota ran into the trees.” So, I was excited about the possibility of my first win in the Leadville race, hoping the Fairplay win would be the model for this race as well. I was in remarkably good shape, felt really strong, rested, and confident. This was going to be my day and I looked forward to celebrating my success on my 45th birthday two weeks later. The burro’s owner did say Dakota the burro had a tendency to make unauthorized right turns, but assured me it would be fine.

As we gathered at the starting line, I pushed my way to the front and calmly waited for the shotgun start. My strategy was to jump out in front and never let anyone pass me so, when the gun went off that’s what I did. Out in front and on fire, we ran two blocks and I signaled the burro to turn right onto E. 7th Street. And that’s exactly what he did, only he turned a bit too sharply and ran up the stairs to the sidewalk and right through the open door of the Manhattan Bar.

The interior of the bar was dimly lit, cool, and quiet at this early hour. There was a bartender wiping the bar, and two customers sitting on stools. Dakota had steel shoes on and they made quite a racket on the wood floor as we entered. The bartender and patrons all turned and looked at me in astonished disbelief. The barkeep stopped wiping and just stared at us while the two patrons stopped drinking, pushed back from the bar, and also stared in amazement. One put out his cigarette and just sat there; the other shrugged his shoulders and went back to drinking. None of the three said anything! Surely there was a good joke in this situation I remember thinking, but all I could think to say was “this was his idea” and point to the burro. Now if I had been standing outside watching the racers and saw one of them go into a bar, I would have followed him inside to see what would happen.

But no one did.

So, I turned the burro around and pushed him out the door, cussing at him the whole time.  And now I’m back outside trying to get back to the street and the crowd would not move out of the way. I didn’t think I would have needed to yell “burro racer coming through!”

Reaching the street, I was mad at having fallen so far behind and told the burro to run real fast to catch up. He did just that until half way up the block he again turned right and headed for a house along the street. These houses are very close together and I would have never thought Dakota could run between the houses.

We burst into someone’s back yard and interrupted a picnic and all activity stopped. The frisbee hit the ground, the cook stopped flipping the burger and brats, and grandpa sitting in a chair dropped his beer. Again, I thought there’s got to be a good joke in this, but no one said anything – they all just stared at me and Dakota with their mouths hanging open. All I could say was “this was his idea” as I pointed to the @#$%$# burro.

So, I again turned the burro around and pushed him back between the houses and back to the street, really cussing at him the whole time.

I hit the street and saw the woman who always walked the entire race turning the corner at Hemlock and I realized I was dead-ass last. I went from first to last in less than three blocks and there was still 20 ½ miles to go.

I discarded my race plan realizing I’d never win and decided to do the best I could. We started off slowly, gradually gaining some speed, passing a few people, but never asking Dakota for too much because I didn’t want any more unauthorized right turns! We kept gaining and passing people including on the Avenue on our way back. I finished 4th that day, and am really proud that I did that well considering I was dead-ass last after leaving the Manhattan Bar.

Burro racing is really fun and good exercise in spectacular mountain vistas, so if you think you have the ass for it, give it a whirl!

END_OF_DOCUMENT_TOKEN_TO_BE_REPLACED

Where the dead get to tell their story By Jaclyn Schrock On Saturday, August 21, the Gilpin Historical Society held their annual Cemetery Crawl. Tickets allowed the shuttle of hundreds of guests from the Teller House parking lot to the Cemetery. Depending on v... END_OF_DOCUMENT_TOKEN_TO_BE_REPLACED