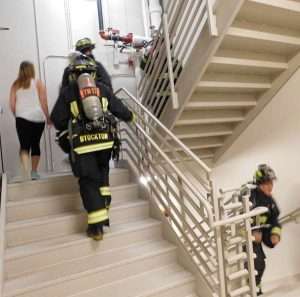 Imagine, if you will indulge me, you are eating breakfast in the firehouse during the morning shift when the alarms begin. As practiced many times before, you grab your gear, throw on your bunker gear (heat resistant coat and pants), altogether about 80 extra pounds, and take your place on the fire engine. It’s not hard to see your destination, because unlike the false alarms you must respond to, this one is a real emergency and you can see the smoke billowing out of the building before you get there. Your primary objective is safety of the people in the building and your crew. The elevators automatically shut down during a fire and so you head directly to the stairs. Carefully assessing for danger on each floor, you climb flight after flight of stairs, being sure people fleeing on the way down are okay and do not need assistance. The stairwell goes on and on. You smell the smoke before you see it, but not until you reach the 78th floor…

Fifteen years ago, 343 firefighters, 60 police officers, and 8 emergency medical technicians heroically died saving the lives of people in the World Trade Center. They climbed up to 78 floors of stairs to reach people trapped by flames and debris. While the number of people rescued from the towers is uncertain, only 12 were saved after they fell. The Ameristar in Black Hawk does not come close to 78 floors, but it does suffice to represent the endurance of the emergency personnel that responded that day. Participants do four laps beginning about two and half stories up, climbing to the 34th floor, crossing by the pool, and then descending to level five, exiting the building and walking down to the stairwell access point to start all over.

There are at least 27 Stair Climbs in the United States, three of which are in Colorado. The Black Hawk Memorial Stair Climb boasts to be the highest climb, but that statistic has yet to be certified. The Stair Climbs raise money for the National Fallen Firefighters Foundation which helps assist families and coworkers of the fallen.

Covering this year’s event, I found myself doing a lap just to see what it might be like. I am not in shape and am probably average for an American. The first few flights were easy and I most likely took them too fast. Along the way, photos of the fallen were posted along the walls. I found out later that there were at least 343 photos encompassing not just the fallen firefighters from the World Trade Center, but other emergency responders, as well. In the group I was with, I kept pace with the slowest person, reading each name as I walked by. By the 10th floor, I started breathing heavy. I was spurred on by my ego as I passed the person I was pacing and kept going. By floor 20, my legs started to hurt; the good kind of hurt after a good workout. On floor 23 I found a kind Ameristar employee handing out water. I’m afraid I chastised her for handing out water when there was none for the firefighters that day. When my mind cleared, I regretted that remark. On floor 30, the hurt in my legs was more like a burning fire and my pace slowed considerably. I was able to pass one more person, though, so not allowing my ego to be spurned by being passed, I pushed myself further. As I finished the last four floors on the upside, I reflected on how hard it must have been to do this with another 80 pounds of gear. At the top, the course had us walking past the pool to the next set of stairs. The lounge chairs next to the pool were calling my name, but I did not give in. I did take a breather to take in the gorgeous views from the top of the building. Now that I was up here, I had the option to take the elevator or the stairs; naturally, I did the illogical thing and took the stairs. Again, this stairwell was lined with pictures of the fallen, but did I stop to read the names? Nope. I was fully focused on descending those stairs without falling. My legs felt like jelly and it took all I had to just walk down. I cannot imagine what it must have been like for those who found someone in need of assisting, helped them back down only to only reenter the building and climb the stairs again. How do you save someone’s life when your own body wants to quit? Once I got down and exited the building, my ego once again reared its ugly head and told me to do it again. My brain won and I stayed on level ground to finish the event.

Ameristar, along with their volunteer group of employees, Ameristar Cares, is proud to host this event and some of their staff take the climb, too. Barring unforeseen circumstances, I am sure they will continue host in the coming years. This is a great way to honor those who gave all that day and I recommend participating for all who are physically able. This is not a race, so you can go at your own pace; that is, unless your ego takes over and you can’t bear to be passed!

END_OF_DOCUMENT_TOKEN_TO_BE_REPLACED

Benefitting the county, schools, and much more By Don Ireland   This year marks the 30th anniversary of casinos opening in the former little mining towns of Black Hawk, Central City and Cripple Creek, Colorado. In those early years, smoking was allowed inside ... END_OF_DOCUMENT_TOKEN_TO_BE_REPLACED