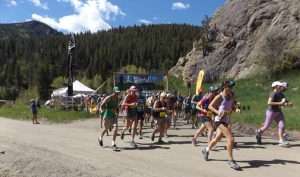 Trail runners in the Eighth Annual Dirty 30 enjoyed clear weather and breathtaking scenery on Saturday, June 4 to challenge themselves, compete for prizes, and to benefit the Gilpin High School athletics program.

The runners and race fans parked at the Gilpin County Fairgrounds and were transported by Gilpin School shuttle buses to the start/finish line at the Golden Gate Canyon State Park Red Barn picnic area about three miles northeast of the park’s visitor center.

The 50K race started at 7:00 a.m. on a crisp cool 45 degree morning. The 12 mile runners were dispatched at 10 a.m. under a clear sky and a warmer 58 degrees. Runners traversed a two track, for about a quarter of a mile then the course went into single track experiencing elevations from 7,600 to 9,500 feet that wound through the park experiencing various terrains that crossed several creeks.

Four Aid Stations were set up at specific locations to assist the runners as they competed. The aid stations were about 5 miles apart and staffed by various groups.

A post-race party has held to recharge the tired runners with food and refreshments including Boulder Beer. Messages were available to provide faster recovery and injury prevention. Then the runners enjoyed Bob Dylan music by The Zimmermans.

Prize amounts: $1,000 each for men’s and women’s 50K winners and $500 for second place, third place $300, fourth place $200, fifth place $100. The top men’s and women’s 12M winners were each awarded $100 for first place. First place male and female finishers will be awarded a plaque made by Top Dirty Thirty finisher Dan Gorman.

Other prizes included the runner who was the bloodiest and had the best story on how they got that way. The crowd got to vote on this award that had a prize of $100, which was probably spent on Band-Aids, gauze, or even medical co-pay.

Golden Gate Canyon State Park is a Colorado State Park located in Gilpin and Jefferson counties northwest of Golden, Colorado. The 12,000-acre park established in 1960 has 36 miles of hiking trails and is a favorite getaway and camping area.