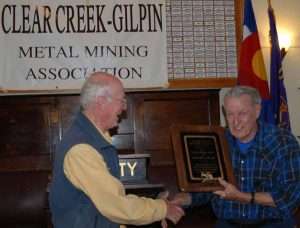 The 74th Annual George A. Jackson “Sowbelly” Dinner occurred on Saturday, May 16, 2015 at the Elks Lodge in Idaho Springs. This event was put on to benefit the Clear Creek-Gilpin County Metal Mining Association that does business as the Clear Creek County Metal Mining Association (CCCMMA). This Association has been in existence since 1925 and was founded to stimulate mining in the area. Now celebrating their 91st year and comprised of over 150 individuals and companies whom actively support the small mining industry from the Clear Creek, Gilpin, Boulder counties and the metro-Denver areas.

This dinner is held in honor of George A. Jackson’s discovery of placer gold near present day Idaho Springs on January 7, 1859.  Jackson returned to his discovery later in May 1859 with additional equipment, tools and supplies and he recovered 95 ounces of placer gold in the first week. His results started the Colorado Gold Rush. The food served at the dinner includes a traditional miner’s fare of salt pork (sowbelly), beans and Cornish pasties. Cornish pasties are in the form of a meat pie and could be easily carried in a miner’s lunch pail and heated by suspending the pail with the pasties inside over a miner’s candle. Proceeds from the Sowbelly Dinner are used to finance various CCCMMA projects throughout the year and to sponsor local teachers to attend the Colorado Mining Association Education Foundation’s 4-week summer field course about mining.

Four main volunteers cooked dinner over the course of three days. On Saturday evening, young men helped with clearing tables and washing dishes from the Rights of Passage program at Estes Park – a program allowing youth to earn a second chance. After dinner, Dave Ball & The Sowbelly Band led a sing-a-long. They played such musical renditions as Oh Susanna, Clementine and Springtime in the Rockies that inspired dance, song and some good ‘ole foot tapping. Guests were entered into a raffle that included prizes such as a $50 gift certificate to local BeauJo’s or Marion’s of the Rockies. Ed Lewandowski next presented the Golden Burrow Award.

The Golden Burrow Award is given to the individual or group that is immensely interested and also supports mining. The 2015 recipient was Richard A. Beach who has been working in the mineral business for 45 years. Departed members were honored and existing members discussed the local mine report. President Chris Stone asked if things were doing well and he received silence as miners looked around the room. Stone chuckled, “The first sign that mining is coming back is that no one wants to talk about it.” Phil Buckland spoke about the Henderson Mine that currently accounts for 70% of Clear Creek County’s revenue.

Buckland indicated that based on recent reports, the Henderson Mine will be closed by 2026. He asked for suggestions from attendees on what could possibly replace this income citing that he felt that some feasible options could come from mining, forestry, agriculture and energy. During the Gold Rush of 1859 nearly two billion dollars of gold ore was removed and is estimated to be only 15% of the total available. Mining of gold, silver, copper and lead could provide realistic income sources for Clear Creek County. President Stone commented that getting the Mill up and running to be completely self-contained would allow mining to expand in the area.

The evening concluded with the presentation Pathways to Gold by writer/ historian Lee Whiteley. He spoke about the various trails across the United States that prospectors and families chasing gold followed out West.  There were some main trails in or to Colorado for travel including: the Platte River; Smoky Hill; Cherokee; South Platte River; and the Leavenworth & Pikes Peak Express trails. These trails became established in 1849 as gold was found in great quantities in other places like Georgia and California. They were quite essential for travel until 1870 when the railroad was established. The advancement stopped the need for heavy traffic on the trails and provided an opportunity for miners to better their operations by being able to obtain heavier equipment to process the ore. What is now, or was formerly, part of the Peak-to-Peak highway was also an important trail for miners during the Colorado Gold Rush. Formerly this highway ran from Manitou Springs all the way north to Estes Park and even included a jaunt over Virginia Canyon, locally known as the “Oh My Gawd” road.

Community members filled up the Elks Lodge with great spirits all around. Present were many of the area’s current and real miners so talk of gold and other minerals abound. CCCMMA members and officers were clear to communicate their excitement for next year’s 75th Annual Sowbelly Dinner, as planning has already begun for a huge celebration. CCCMMA Membership is open to anyone in Colorado or abroad who has a stake in the mining industry or who would simply like a valuable resource for mining news and advice. More information can be found at www.cccmma.com.

END_OF_DOCUMENT_TOKEN_TO_BE_REPLACED

Benefitting the county, schools, and much more By Don Ireland   This year marks the 30th anniversary of casinos opening in the former little mining towns of Black Hawk, Central City and Cripple Creek, Colorado. In those early years, smoking was allowed inside ... END_OF_DOCUMENT_TOKEN_TO_BE_REPLACED

Benefitting the county, schools, and much more By Don Ireland   This year marks the 30th anniversary of casinos opening in the former little mining towns of Black Hawk, Central City and Cripple Creek, Colorado. In those early years, smoking was allowed inside ... END_OF_DOCUMENT_TOKEN_TO_BE_REPLACED