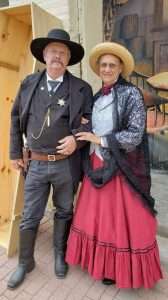 There may be a body in an inactive mineshaft on Alps Hill, according to Gilpin County mine rescue official Van Cullar. A lady’s jacket and scarf were spotted just outside the shaft by hikers on Sunday, and the mine rescue team was called in to investigate. A number ofitems of clothing could be seen, and Cullar said the shaft will be explored in the near future by the mine rescue team. Since it is not known if anyone is in the shaft, and any mine rescue poses hazards to rescuers, Cullar said the team will prepare and plan the operation before descending into the shaft.

North Clear Creek is “the nearest thing to a death zone you’ll find in this area,” according to John Woodling of the Colorado Department of Wildlife. Referring to the creek’s inability to sustain fish life, Woodling made his comment during a meeting of the citizen review committee that is following the work of the State Health Department, which is performing water quality studies in Gilpin and Clear Creek Counties as part of the U.S. Environmental Protection Agency (EPA) Superfund cleanup of acidic mine drainage and mine waste in the area. Asked to elaborate on his assessment of North Clear Creek water, Woodling said that based on the “extremely high concentration of metals” in the water, the creek is so horrendous that trout couldn’t live for more than a few hours in it.” The Department of Wildlife performed a creel survey, in which fishermen were interviewed to determine what type and how many fish were being caught along Clear Creek and its main tributaries. The study, which began in May and ended in September, showed numerous varieties of trout in fairly large numbers above Georgetown, with those numbers and types declining drastically downstream. Areas surveyed included the main stem of Clear Creek from above Georgetown to Golden; the West Fork from Empire to I-70; and the U.S. Highway 6. North Clear Creek contributes the heaviest load of metals into area streams, Woodling indicated. While almost all the data in the water quality study has been gathered, analysis has just begun. Preliminary results of the study are expected by December, said Health Department spokesman Jeff Deckler. Additional studies will be performed to determine just how much the water quality must be improved in order for the stream to support fish life. A more detailed explanation and analysis of the water quality study will appear in the Register Call soon.

Born: Richard and Cassie Austin are the parents of a new son, Christopher David, born August 21, 1989. Christopher joins his parents and big brother, Kenneth James, 2, at home in Fort Monmouth, New Jersey, where Dad is stationed with the Army. Paternal grandparents are Rosemary Moore and Mark Nelson, of Central City, and is grandma ever proud! Maternal grandparents are Mr. and Mrs. Ben Shaw, of Lynn, Massachusetts.

Married: Mrs. Betty D. Olson, of the Black Hawk area, announces the marriage of her son, Robert James Olson, of Black Hawk, to Virgie Melinda Dailey, of Cedaredge, Colorado, on August 27. The pair were wed at Lutheran Hospital, in the room of the groom’s father with family members present. Hospital Chaplain Bruce Rippe performed the ceremony. The bride is the daughter of Arnold L. Dailey, Jr., and Gladys Dailey, of Cedaredge. Samuel Olson served as best man for his brother, while Dawn Kroeze, sister of the groom, stood with the bride. Lyn wore the wedding gown of Robert’s second sister. The couple went to Indian Springs Resort in Idaho Springs following the wedding. A reception will be held for them in Black Hawk on October 7. They will make their home in the Gilpin County area.

Died: Leta J. Griffith, a longtime Central City resident, died Sunday, September 24, 1989. Mrs. Griffith, who had just celebrated her 100th birthday, was born in Central City on September 19, 1889, to Samuel and Sarah (Dunne) Warne. She was preceded in death by her husband, Lowell A. Griffith. Mrs. Griffith lived more than 90 years of her life in Central City, where she helped many area doctors in delivering babies and other nursing duties. She was well known for her care of others. Survivors include daughter Luella Thomas, of Golden; grandson David E. Blake and wife Dorothy of Nucla, Colorado; granddaughter Evelyn Blake McColl and husband Jeff, Las Vegas, Nevada; great granddaughter Leah Blake Roberts and husband Russel, Juneau, Alaska; and great-great granddaughters Heather Rene and Brooke Lene Roberts, also of Juneau. Visitation was held at Woods Mortuary in Golden on Thursday. A private service was held for the family, and interment was at Crown Hill Cemetery in Lakewood.

Died: Neal Edwin Olson, Sr., of the Black Hawk area, died September 1, 1989, at Lutheran Medical Center in Wheat Ridge. He was 54 years old. Neal was born March 25, 1935, to Lucile May and Edwin R. Olson at their home in Arvada. He attended school in Arvada, and lived there for 20 years after his married to Betty D. Foose on June 20, 1952. They had six children. Neal went to work for Mountain Bell, now U.S. West, in March of 1953. He was a locksmith for U.S. West at the time of his death. He was a member of CWA Local No. 7777, and the Telephone Pioneers. He also belonged to the Mile Hi Jeep Club. Neal was a football fan, mostly the Broncos. He loved the mountains, where he and his family moved in June of 1984. He was an avid fisherman, hunter, and camper. Neal is missed by his wife, Betty D. Olson; and six children, Jo Marie Larson and husband Ed, of Northglenn, Denise May Wright and husband Doug, of Fort Collins, Neal Edwin Olson, Jr., and wife Shelley, of Federal Heights. Dawn Ellen Kroeze and husband Paul, of Colorado Springs, Robert James Olson and wife Lyn, of Black Hawk, and Samuel David Olson, still living at home. He is survived by 15 beloved grandchildren, as well. Additional survivors include his father; and sister, Nellie L. Frisinger of Evergreen. He was the son-in-law of Virginia Marcum of Arvada, and Marcella Foose of Green Valley, California. He had numerous other relatives and many friends. Cremation was at Woods Mortuary in Golden. A memorial service was held Sunday, September 3, at 6:30 p.m., at the Rocky Mountain Evangelical Free Church in Black Hawk.

Across the Crossroads, by A.F. Mayham: Bell Telephone Company has developed, and it’s now working on a test field program: the push button phone. One doesn’t dial as is now the custom, but simply pushes a button corresponding to the number wanted. It is operated by a transistor within the instrument. General adoption of the system will entail a change-over in central offices to handle both methods, dial and push button. Factors affecting speed and accuracy had to be studied accompanied by experiments, as some people have a heavier punch than others. The new system sends a different calling signal than at present and complex automatic switching has to be changed, but that’s all done at “central.” It won’t affect your business phone.

Mrs. Morgan Gray is on the sick list this week.

Born: A son was born October 2nd, 1959, at St. Anthony’s Hospital to Mr. and Mrs. Tom Miller of Evergreen. Grandma and Grandpa Charles Moody, of this city, are quite thrilled as this is the first grandson, all the other grandchildren being girls.

Died: Funeral services were held in Alhambra, California, last week for Lester Bennet, who died of a heart attack the week previous. Lester was born in Central City in 1893 and was 65 years of age. He had been a resident of Alhambra for over 40 years, but each year during the summer visited here to greet friends of bygone years. He was prominent in graphic art affairs and was a charter member of the Los Angeles Advertising Club. He is survived by his widow; two sons, Dr. Leslie R. Bennett, of Los Angeles, and Marshall L. Bennett, of San Marion.

Mr. Forbes Rickard, a well-known mining engineer, formerly of this city, accompanied by Walter Ware, made this office a pleasant call on Tuesday last. Mr. Ware has commenced work on the Kirk Mine, on Quartz Hill, which in former years was a large producer of uranium ore, from which radium was produced, and is getting the property in shape for production. There is a great demand for that mineral at the present time, and Gilpin County mines have the largest supply of any section on Earth, and with development the mines can be made to produce as large quantities as at any time in the past.

Attorney Leroy J. Williams was up from Denver on Friday of last week, attending to legal matters before the county court.

Died: George Behr, aged 65 years, died suddenly Monday morning, of a heart attack at his home in Idaho Springs. Mr. Behr, a former well-known Golden resident, moved to Idaho Springs about twenty-five years ago, where he was employed with the Public Service Company. While there he was engineer for the old Illuminating Company. He married Miss Edith Rowling, niece of Mrs. E. Rowling of this city, who survives him. He also leaves twin sons, Ray, who is a student at Denver University, and George, Deputy County Clerk in Georgetown; two sisters, Mrs. George Cooper of Fairmount and Mrs. John Wasson of Santa Barbara, California; three brothers, Ernest of Phillipsburg, Colorado, Adolph and Walter of Denver.

Postmaster Charles Wagner, of Russell Gulch, returned Thursday from an extended visit with relatives in Illinois and Wisconsin.

Sinking is progressing favorably in the shaft on the Concrete No. 2 property, at a depth of 1,400 feet, and is being prosecuted with three 8 hour shifts, with the intention of going down another 100 feet. The mine is making regular shipments to the mills and smelter, and is being operated under the management of Mr. S.V. Newell.

Patrick McCann, superintendent of the Burroughs Mining Company on Quartz Hill, was thrown from his buggy on Saturday last on Quartz Hill, by a wire rope becoming entangled in the spokes of one of the wheels. He was badly shaken up, but escaped serious injuries.

Peter Johnson, foreman at the Central City Mine, was seriously injured while at work in the 520 foot level Sunday afternoon, by a large slab of rock falling from the side of the wall, which caught him about the hips and lower part off the body, pinning him to the ground. After being released he was taken to his home, where he is suffering from internal injuries.

Born: In Nevadaville, September 29th, 1899, to the wife of Joseph Pascoe, a daughter.

Married: In Fort Collins, September 27th, 1899, at the residence of the bride’s parents, Mr. John Fitzgibbons of Central and Miss Eliza Golden, of Fort Collins.

The editor of the Register acknowledged the receipt of some delicious wine, manufactured from mountain raspberries, which was presented by Mrs. Hickox of Willis Gulch.

Mr. L.K. Le Bean had invented a machine for washing gold, which was being successfully operated in Russell Gulch.

Some mountain pack rats got into the house of Mr. Hale and got away with his false teeth, which were on the bureau. They were afterwards found in the rats nest under the weather boarding.

END_OF_DOCUMENT_TOKEN_TO_BE_REPLACED

Benefitting the county, schools, and much more By Don Ireland   This year marks the 30th anniversary of casinos opening in the former little mining towns of Black Hawk, Central City and Cripple Creek, Colorado. In those early years, smoking was allowed inside ... END_OF_DOCUMENT_TOKEN_TO_BE_REPLACED