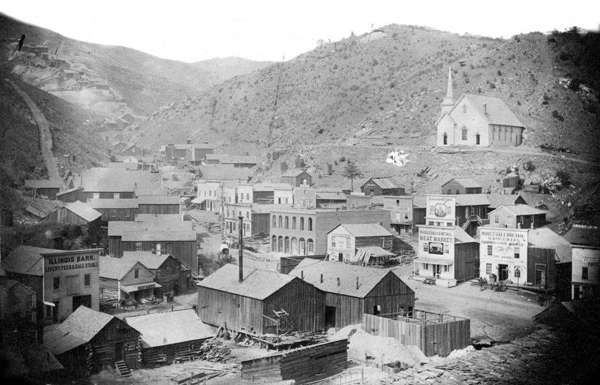 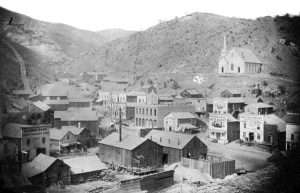 Orrin “O.J.” Knutson resigned as Black Hawk Marshal on Friday, July 1. Citing “personal reasons that are far reaching” in his letter of resignation, Knutson advised the city council that he will remain on the job until July 15. Knutson intends to work locally while attending computer school. He and his wife, Ruth, plan to remain in Gilpin County permanently, and to become more active in local activities. He is presently a member of Gilpin County Search & Rescue and the Black Hawk Volunteer Fire Department. The Knutson have two children and moved to Black Hawk in October of last year.

Central City has a new business – a wedding chapel right on Main Street! The “Chapel of the Coin,” more commonly known as the Gold Coin Saloon, was the site of an early morning wedding on July 4. Flatlander Jan Wilde took the hand of Raymond Dal Pra at 8:30 a.m. A breakfast followed, with 13 guests partaking in the buffet feast. “Mmmm,” remarked one. “This orange juice is delicious. I wonder if it’s spiked.” Of course it as! It was a Mimosa punch containing at least as much champagne as orange juice. The happy couple live in New Glarus, Wisconsin, where they own and operate their own drinking establishment, so the Coin seemed like an appropriate setting for their wedding. The bride’s mom, Mary Ann Wilde, moved to Gilpin County about a year ago and suggested the Coin, one of her favorite local haunts according to Jack Brown. Brown, in turn, recommended the Revered Doug Mills to perform the nuptials. Once they sell their business in New Glarus, the Dal Pra couple plans to move here too.

The former Kristin Murphy and her spouse of several months, John Hunt, repeated their vows in Central City Monday and hosted a reception at the Gold Coin Saloon for Kristin’s many friends in the area. Not in that it was July 4th, as well as the fourth time the Hunts have said their vows, one local wag suggested the cake be decorated with the words “Happy 4th.” Kristin was once employed as the public relations coordinator for Central City. Hunt and Hunt now live on the east coast.

This week we start Volume XCVII, No. 1, meaning the Register Call is starting on its 97th year. We are proud of this record, and feel quite humble in comparison and with other editors of the paper, which has chronicled the birth, marriage, and death of many, many residents of Gilpin County. Closely approaching the Century mark, and the second oldest paper in Colorado, we hope that within three years, God willing, to still be at the helm when the 100th year is celebrated.

The Kenneth Montgomery family left last week for their home in Puerto Rico. Mr. Montgomery is with the National Labor Relations Board.

After some time spent at the Rudolph Ranch while the owner was away, Mr. and Mrs. Arthur Nicholas returned to their home in Idaho Springs.

Mr. Elven Jacobson returned to New Mexico after a two day visit with his wife, Jean, who is currently staying with Mr. and Mrs. Jim Robins.

Mr. and Mrs. K.M. Brown drove to Lakewood on the Fourth to visit his mother, Mrs. Agnes Brown, who was 90 years old on that day. Others present for the birthday celebration were two sisters, 80 year old Mrs. Martha Duncan and 70 year old Mrs. Edith Meyer. Also a niece, Mrs. Mamie Deck, all of Indianapolis, and her 84 year old brother, Mr. Ed. Deckover of Denver.

After two years in New Mexico, Mr. and Mrs. Allen Clark have returned to their home on Gregory Street.

Mr. and Mrs. Melvin Adams and baby daughter of Bremmerton, Washington, flew to Denver in their private plane and are now visiting her grandmother, Mrs. Perl Neff. Others to arrive this week for a short stop are Mr. and Mrs. Alfred Neff on their way home to San Carlon, California, after touring Washington, D.C., and other eastern cities.

A relic of the early days when H.A. W. Tabor was still rated as an ordinary prospector and before he had amassed the fortune which became world famous, has finally found a resting place in the Colorado Historical Museum. It is the now rusty and battered pan with which Tabor sought gold in Peck’s Gulch, Gilpin County, in 1859. The pan was found recently half buried in the sand where Tabor abandoned it by Albert B. Sanford, assistant curator of the museum.

The Misses Jane and Virginia Williams, who had been attending a campfire party near Idaho Springs, came over to Central Sunday evening and will spend the balance of their school vacation with their parents here.

Walter Nellson, wife and daughter, Miss Helen, came up from Denver Saturday, for a short vacation and while here were the guest of Mr. and Mrs. Ray Laird, returning home Monday morning. Mr. Nellson is an accomplished musician, and is the leader of the orchestra of the Empress Theatre. He led the orchestra in the studio at KOA Denver on Wednesday evening, and those in Central who turned in on that station that evening, heard most charming music.

Died: In Pagosa Springs, June 17th, 1928, Thomas Lucas. The announcement of the death of Mr. Lucas came to this office in the columns of the Journal of Pagosa Springs, and was a great surprise to his many friends still residing here. He grew up to manhood here, served apprenticeship in this office, and worked for years in the mechanical department, as well as the Observer office, published here at that time. He was a member of the fire department, and took great interest in the organization and was ever ready to respond for duty. The following is the article from the Journal, telling of his residence there, and of his death: Shortly before 10 o’clock Sunday evening, Thomas Lucas, one of the best known of the old time punters of this section, went quietly to sleep, here in the little city he loved above all others. Tom, as his legion of friends knew him, first came to Pagosa in 1918 to work on the Sun and made Pagosa his home until about two years ago, being employed nearly all the intervening eight years on either the Sun or Journal. During the last two years, he was in Durango most of the time, but worked a few months on papers both in Farmington and Silverton. He returned to Pagosa about a month ago and seemed in fairly good health until a week before he died, when he began to fail, although his friends did not realize that death was imminent until a few hours before the summons came. Tom was born in Wisconsin nearly 76 years ago and later when his family moved to St. Louis, Missouri, the Civil War was on and there as a lad he saw soldiers at drill in preparation for the big struggle. Later the family came to Denver and finally located at Central City. There Tom grew to manhood and came to know many of the big men of Colorado’s infancy. He learned the printer’s trade on the Central City Register Call, then a daily, going into the mechanical department after being on the force several years as a paper carrier while he attended school. During some of his school years his teacher was Prof. H. M. Hale, one of Colorado’s greatest educators, and was a schoolmate of the latter’s son, Gen. Irving Hale, who graduated from West Point with the highest rating ever won by a West Point graduate up to that time, if not for all time, and who later led the Colorado troops in the war with Spain. He was reared in a community of big men and though he did not gain the public honors that many of his fellows did, he too was a high grade man and won the honors that come to those who secure and hold the regard of all in the everyday activities of a busy life. The Journal editor became acquainted with him and worked with him when he first came to the San Juan and, in later years, had come to know him well as a honorably in all his dealings, a good citizen in every way, patriotic, public spirited, and held in high esteem by all who knew him. No one ever heard Tom Lucas speak ill of any man. He is survived by two brothers, William, a printer now employed as a proof reader on the Los Angeles Herald, and Mike, a painter, whose address is not known, a brother in law who resides in Durango, and three grown nieces, daughters of Mr. Murphy. The latter and his son in law, Mr. Zender, arrived from Durango Monday and made arrangements to have the body sent to Durango, where on Wednesday, after funeral services conducted by Rev. Father Kipp, he was laid to rest in Greenmount Cemetery.

Mr. John H. Bonney, manager of the local telephone office, committed suicide in his office Saturday evening, by drinking a dose of cyanide of potassium. He left no note or paper giving his reasons for the act, and as his accounts were found correct in every particular, the true cause for his suicide may never be known. He was the son of H.C. Bonney, of Boston, Massachusetts, who holds the position of auditor of the American Bell Telephone Company, and came here from Idaho Springs nearly three months ago to fill the position made vacant by the promotion of R.R. Rodda, to the Aspen office of the company.

Mrs. S.A. Rank and her daughters, Misses Zelia and Mollie, and Mrs. James Stark and Mary Stark, were held up by a midnight robber in Denver, Sunday morning, who secured the pocketbook of Mrs. Rank and then fled. The party was returning from an open air play at Chutes Park. Mrs. Rank was knocked down and the women fled, except Miss Zelia who rained blows on the hand of the robber with her umbrella, when he drew his revolver and fired at her, but the shot went wide and he took to his heels.

Miss Edith Bostwick of Black Hawk left for Denver Thursday, accompanied by her wheel with she all use while touring the city and visiting her friends.

Marin Pierce, a miner, was instantly killed Thursday night by falling 200 feet in the shaft of the Hidden Treasure Mine. He was coming up in the bucket from the 900 foot level, and when about the 700 foot level, he fell out of the bucket, to the 900 foot station. He was instantly killed by the fall. He was 22 years of age, leaving a wife in England and a brother in Golden.

McKay and associates, who are working the Annie Mary claim, on the Wedge property, in Lake District, are taking out some handsome smelting ore, which is being sorted into first and second class ore. Shipments of the first class mineral have returned as high as $350 per ton, made by the present operators, and equally as good results are expected from the mineral now being mined.

Foreman Rowe, of the Saratoga Mine in Russell District, says that preparations are being made to sink the cage shaft from its present depth of 900 feet to the 1,000 foot point. The mine is keeping up its regular shipments of ore to the mills and sampling works. 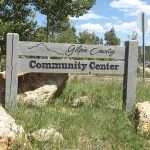 Gilpin County agreements for elections, roads, and cemetery
Next Article 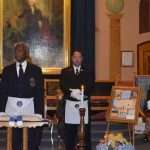