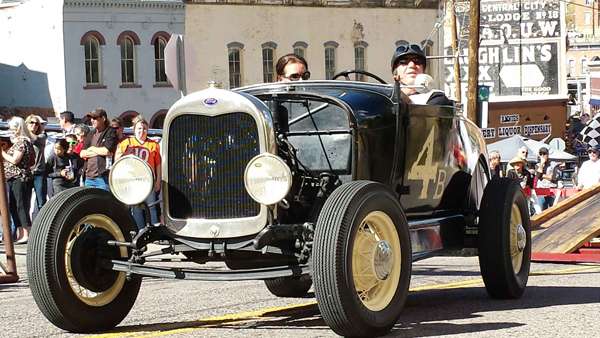 Comes to Central City in a Big Way!

Vintage 1950’s hot rods were spotted on Thursday, September 15th converging on Central City and Black Hawk from all over the state and beyond, causing the community to wonder what was going on. It was soon apparent by Friday noon when over 150 vintage cars roared up to the KOA for tech inspection after the morning reliability run from Golden to Central City to kick off the Hot Rod Hill Climb. The tech inspections completed by 5 p.m., then the Big-T parking lot was turned into the racer’s pit area and for checking out all the cool cars and meeting some awesome people. Entertainment by live bands on Main Street kept things fun, followed by a campfire at the KOA at 9 p.m., and a kick-off party at the Reserve Casino.

Hot Rod Hill Climb is a throwback to the 1950’s where Hill Climbs were sprouting up all over the United States. In fact Colorado’s own Georgetown was host to the Hot Rod Hill Climb in 1953 and 1954, then Nick’s Hot Rod Garage brought back two 60th anniversary events in 2013 and 2014, and a third in 2015.

On Saturday, breakfast was served by the Century Casino, the Reserve Casino, and the KOA, then the racing started in earnest at 9 a.m. following the National Anthem up Spring Street. Live bands, vendors, and all the food and drink you could want was available on Main Street. The racers lined up in the Big-T parking lot, and launched from a wooden ramp up Spring Street, which has a pretty steep climb for these vintage racers ranging from 65 to one car that was 103 years old! Hop-Up Magazine hosted an after-party at the Reserve’s Lava Room with singer Rosie Flores providing the music from 9-11 p.m.

On Sunday, the event culminated with a scenic Peak to Peak Highway run from Black Hawk to Estes Park for those who wanted to wind down with a cruise to enjoy the high peaks and fall colors.

Nick’s Hot Rod Garage in Englewood, CO put on the event, and they did a great job. Last year’s event was even covered in Hot Rod Magazine. When asked why they moved the event from Georgetown to Central City this year, they said that the event was so popular that they outgrew the venue and chose Central City as there was more to do as well as more room for the racers, vendors, and spectators. To enter your ride in next year’s event, check out hotrodhillclimb.com and sign up for their newsletter, or just plan on attending and having a great time!

END_OF_DOCUMENT_TOKEN_TO_BE_REPLACED

Benefitting the county, schools, and much more By Don Ireland   This year marks the 30th anniversary of casinos opening in the former little mining towns of Black Hawk, Central City and Cripple Creek, Colorado. In those early years, smoking was allowed inside ... END_OF_DOCUMENT_TOKEN_TO_BE_REPLACED

Where the dead get to tell their story By Jaclyn Schrock On Saturday, August 21, the Gilpin Historical Society held their annual Cemetery Crawl. Tickets allowed the shuttle of hundreds of guests from the Teller House parking lot to the Cemetery. Depending on v... END_OF_DOCUMENT_TOKEN_TO_BE_REPLACED