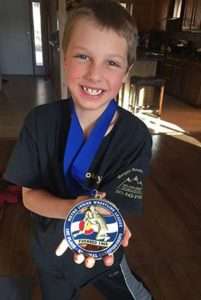 27 of our Gilpin County Youth Wrestlers were competing last Saturday at Bennett High School in the Metro League Region 1 Tournament for a chance to finish in the Top 8, take home a large medal, and a chance to compete for the championship at UNC in Greeley. Last year GCYW managed to put four wrestlers into the championships, and this year 24 of our 27 kids entered brought home medal hardware and are moving on!

All the kids from the eleven teams in Region 1 were buzzing about “going to state” and the atmosphere was contagious. The level of competition was elevated with all the added motivation of medals and making it to the next level. Many Gilpin wrestlers found a new motivational gear in this environment and pushed on ahead of all odds.

This was a blind draw, straight line, double elimination tournament, unfamiliar to many of our wrestlers who are competing for their first year. What that means is if they lose two matches they’re out, and if they lose early they have a very long way to go in the consolation matches to place in the tournament. Blake Weichel found himself losing in the first round of a 32 man bracket, Joey Morgan in the second round, but both ended up wrestling through seven matches to fight their way back and move on.

Other Gilpin Wrestlers had a shorter more direct route to the championships. Cooley Murdock just flat-out annihilated every opponent who dared step out on the mat to challenge him – it was truly brutal at times to witness. Joey Airola dominated all of his matches, winning straight through each to first place. Kaleb Oliver had to battle for first, catching his opponent in the closing seconds of his finals match.

If there was an award for heart, Mason Sechler would have taken that home. As a first year competitor, Mason found himself unbeaten in the finals in overtime against an overwhelmingly superior opponent from Erie. This kid had years of experience, great muscle and technique, and an unbelievably intimidating winning record. All of which did not phase Mason who just plain wanted it more and won the scramble for the takedown through sheer determination alone. Mason ending up on top in overtime might have been the loudest and proudest moment of the day for Gilpin County.

This coming Sunday, the 550 best wrestlers of the Metro League will be competing for huge trophies the size of Cooley. The championships are held at the Butler Hancock Arena at UNC in Greeley. Gilpin County Youth Wrestling is looking forward to the experience that this environment will build in our youth athletes! It’s been an amazing year and the Gilpin County Youth Wrestlers continue to demonstrate that they can rise to the level of competition, no matter how high it is.

END_OF_DOCUMENT_TOKEN_TO_BE_REPLACED

Where the dead get to tell their story By Jaclyn Schrock On Saturday, August 21, the Gilpin Historical Society held their annual Cemetery Crawl. Tickets allowed the shuttle of hundreds of guests from the Teller House parking lot to the Cemetery. Depending on v... END_OF_DOCUMENT_TOKEN_TO_BE_REPLACED