The first item of business was approving the consent agenda which included the Cash Flow Update for November 26; and the City Council minutes of November 18. Alderman Gaines moved to approve the Council minutes and was seconded by Alderman Spain. The motion passed unanimously.

The Council opened the floor to the public for addressing any issue on the evening’s agenda. No one from the public opted to speak to the council.

A budget is born

Finance Director Shannon Flowers introduced Resolution 14-20 which would adopt the 2015 Budget, adopt the Capital Improvement Plan, set a Property Tax Mill Levy, and approve the Central City BID 2015 Operating Plan and Budget. Flowers highlighted that changes made since the last iteration were all grammar and “typo” related and not substantive. Alderman Gaines agreed, “I read the whole thing and the only changes I had are grammatical.”

During public forum, resident Jack Hidahl addressed the Council saying, “I am amazed how few people stand up and say anything about the budget. The budget is the most important document the City has.” Hidahl also stated it was a shame that public hearing and adoption were scheduled for the same day. It gives the appearance the Council will adopt the budget without public consideration. Jack then recommended that for next year, the Council change policy so that a public hearing could be had at least one meeting prior to the adoption deadline. Hidahl then complemented the Council and Staff for all their hard work on the budget. “This is a good looking budget,” said Hidahl. Jack criticized the Water Fund and urged the Council to find a way to subsidize the fund instead of making it self-sufficient. He also warned that Central City is dangerously close to the broken window syndrome and to stop using the Historic Preservation Fund as a stop-gap measure every time something unforeseeable happens. He believes that if the voting public of 1990 could see how little of gaming revenue would go to historic preservation, there would be no gaming in Colorado. Hidahl said that the citizens of Central City are losing their pride due to the peeling paint, broken windows, and shabbiness of its historic places. Mayor Engels thanked Mr. Hidahl saying his comments were insightful and appreciated. Alderman Heider moved to approve Resolution 14-20 and was seconded by Alderman Voorhies. The motion passed unanimously.

2015 marketing device fees to be set

Finance Director Shannon Flowers introduced Ordinance 14-08 which would extend the device fees as set by Ordinance 13-17 due to expire at the end of 2014. The marketing device fee funds advertising and marketing costs incurred by the Business Improvement District (BID). The prior ordinance amended the flat rate fee to a variable rate fee that can fluctuate between $5 to $7 per device determined by the current number of devices within and City and the total projected amount needed by the BID to cover marketing expenses. Ordinance 14-08 would extend the variable rate device fee through 2015. The new Budget reflects a $7 dollar device fee for the whole year. The first reading of Ordinance 14-08 was moved to approve by Alderman Voorhies and seconded by Alderman Heider. The motion passed unanimously.

The added item to officially appointment Alderman Shirley Voorhies to the Main Street Steering Committee was quickly commented upon and voted on. Mayor Engels stated that Voorhies has the most experience and is the best representation for the Council. Alderman Gaines moved to approve the appointment of Shirley Voorhies and was seconded by Alderman Spain. The motion passed unanimously.

City Clerk Reba Bechtel shared with the council some interesting statistics from the recent mid-term election. As of August 8, there were 418 registered voters, yet 467 ballots were mailed out. Of those mailed, 293 of them (63 percent) were mailed back. Forty-two people elected to vote in person making the total vote count 335, which is 72 percent. As of November 18, there were 490 registered voters in the City of Central. This equates to a 68 percent voter turnout with 72 new registered voters.

Public Services Director Shawn Griffith reported that the Xcel utility project has been delayed. The first significant freeze of the season resulted in nine calls for water line breaks. Although all Parkway lights are on, one has been taken down for repair. The Public Works employees are putting the finishing touches on the snow gates on the ends of the Parkway and emergency responders will soon be trained on their use and functionality. The Christmas tree this year was hand-picked from John Blake’s property and has been set-up and decorated. The official lighting ceremony will be conducted Friday, December 5, at 6:30 PM, with a little help from the Peak to Peak Chorale.

Alderman Gaines updated the Council regarding Greg Moates. Greg was in the hospital, but was released today and is home resting now.

Alderman Voorhies complemented Public Services for having the Parkway lit and having a gorgeous Christmas tree. Voorhies also reminded everyone of the coming Tommyknockers events.

The Council opened up the floor to the public for comment on any issues.

Brad Snedeker of Longmont chose to address the Council. Snedeker said “I’ve seen budgets more transparent than this one in the past.” He queried if the City Attorney invoices the City, will the invoice show up in the budget for that month and will it be available for citizens to see? Mayor Engels reminded Snedeker that the Council does not answer questions during Public Forum, but will direct staff to sufficiently answer questions later. Snedeker stated, “That’s okay; my questions are really directed at Daniel Meira.” Snedeker followed by asking City Manager Miera directly, “Is an invoice transparent to citizens – yes or no?” Meira responded saying he would answer his questions after the meeting. Snedeker then asked if the snow gates on the Parkway were approved by CDOT. The Mayor again reminded Snedeker that in the interest of not turning this into a work session, staff will take down questions and provide answers later. Manager Miera added that he was writing down questions as they were asked. Snedeker then said he reviewed agreements with the BID some time ago. Then he asked, “How did the City get to the point where the BID gets marketing dollars, when they were originally charged to get the Parkway funded and built?” Again, Meira responded that he has made note of the question and will respond to him personally after the meeting.

Resident Jack Hidahl once again addressed the Council saying, “I wanted you to know that some of your employees’ actions were exemplary.” Hidahl described a night in which he woke up realizing the noise he was hearing was running water. The house behind his stands empty and has no power so during the latest freeze, the pipes froze and sprung a leak. Hidahl stated that a City Officer along with Rudy and Shawn Griffith got the water turned off. Hidahl was impressed that they worked so fast, along with the municipal judge, to be granted access to the house to shut off the water. “The effort that was made and the timely response was astonishing,” said Hidahl.

Hidahl remained at the podium to inform Council that he has given a book to Manager Miera and several copies to the Visitor’s Center. The book is Tombstones and Gold and Mis’rys Untold by P.E. Redmond. Hidahl described the book as one that describes the miner’s life in the most exact and unique way using stories and poems. “You have no idea what it’s like” mining rock underground “until you’ve read this book,” stated Hidahl. Jack then asked the Council to consider purchasing multiple copies of the book for the Visitor’s Center as this is the kind of book that belongs here. Hidahl ended saying, “I understand that you don’t make decisions during Public Forum, but a nod and a wink would be appreciated.”

Resident Kathleen Ashpaugh next addressed Council saying she is “concerned about the snow gates” on the Parkway. She has driven the Parkway for many years commuting to Lakewood and only twice has she needed and appreciated the four-wheel drive on her vehicle. Ashpaugh was concerned that the City is spending money on things it does not need. “I would like to see how many times the Parkway has been closed,” she said. Kathleen added that she doesn’t know how citizens will know if the Parkway is closed or not. She does not want to drive all the way to the Parkway just to discover it is closed and have to turn around.

The meeting adjourned at 7:35 pm. Mark your calendars for Tuesday, December 16, for the next regular council meeting. 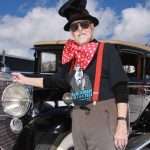