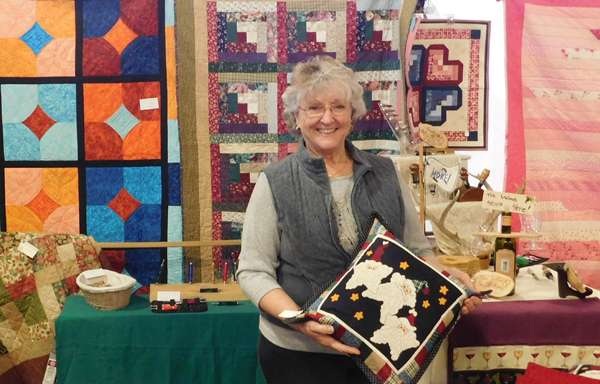 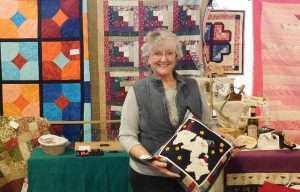 The 16th Annual Winter Arts Festival, December 8th and 9th, sponsored by the Gilpin County Community Center brought food, music, balloons, gifts galore, and of course, the main man of the North Pole, Santa Clause. The Community Center was decked from top to bottom in festive decorations including an over-sized chandelier made entirely from balloons courtesy of Tonya McNeill. The holiday season would not be the same without the Festival where folks can find fine art, crafts, homemade jellies and breads, locally roastedcoffee, books, antiques, dogs to adopt, and fun knick-knacks to fulfill their gift lists. Special music from Calvary Chapel Choir and The Gael accompanied shoppers drifting from one vendor to the next. Demonstrations from Gilpin Parks & Recreation Dance and Taekwondo wowed the crowd. The Holistic Homestead held their semi-monthly farmer’s market with fresh, organic produce. One of the great things about the mountain festivals, is it brings together an amazing and interesting group of people.

Joleen Naylor-Sheldon, attic artist, had a booth bedecked with oil on canvas paintings, paper sculpture, and repurposed multi-media art items; a well-rounded artist. I was admiring an abstract multi-layered black and gray three-dimensional painting as Joleen talked to me about the art that she is currently working on – a children’s book. Her joy and excitement oozed outwardly as she described her tale of “Jester Lester and the Mean Green Bean,” a story of acceptance, understanding, and healthy relationships. The self-illustrated book is not yet published, but is fully conceptualized and Joleen is putting the finishing touches to the book with a business plan together for publishing. Joleen could be the next J.K. Rowling, so keep your eyes peeled!

Linda Harrison of Dirt Road Embroidery & Quilts is hemmed-in to her booth by quilts, pillows, blankets, pot-holders, and other handmade creations. Harrison has a heart three sizes larger than most and featured a table of items from the Gilpin Stitchers in which all proceeds from sales are being donated to CASA. CASA, court appointed special advocates for children, helps provide necessities for abused or neglected children.

Tonya McNeill is a balloon artist that didn’t start creating with balloons until later in her adult life. You would never know she is new to the craft as her creations are amazing and a step beyond your typical balloon animals. She crafted the aforementioned balloon chandelier along with many other decorations for this festival, but also put together a larger than life-size turkey before Thanksgiving that she used as a pool float. The talented McNeill teaches aquacize at the Community Center putting her creativity to work adding variety and fun to her classes.

Leslie Murkland represented Wooden Horse Outpost along with her husband, James Murkland, and friend Kristy Usnick. The booth could have been lifted right out of a bazaar in southern Russia. Leslie told me she found most of the items on display in Kazakhstan. When asked, she humbly says she spent some time there with her company as an IT consultant. Fortunately, her husband, James, was on hand to brag about his wife. He reported that Leslie was the first American woman that section of Kazakhstan had met. The locals are shorter and darker-skinned. Leslie was also in charge of developing an IT department for an oil and gas company in the area and she was the first female IT manager and pioneer in IT development. She built the IT department with Americans first; then trained locals to slowly take over until all American’s jobs were taken. To get to the remote area, Leslie had to fly in a rusty old plane and join a caravan to the village. She spent months among the locals and was amazed by the talent and artistry, and so she happily contributed to their economy and purchased as much as she could to bring back and share with us in America.

It should be obvious that the Winter Arts Festival is so much more than just a local craft fair. This is a place filled with fascinating people and the event is loved by locals. In fact, the local folks used this as a time to catch up, socialize, and get to know each other, as much as they used it for shopping. The Festival is a jewel in the rough that more people should experience because it reflects the culture of mountain living – small, but weird! 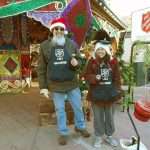 A slot in Black Hawk that always pays off!
Next Article 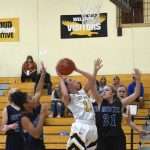