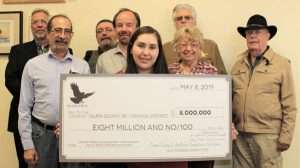 The first was to help ensure a reasonable and responsible property tax rate for the residents and businesses in Black Hawk.

The second was to establish a significant and sustainable revenue source for the Gilpin County RE-1 School District that would increase as Black Hawk prospered and achieved its goal of becoming a resort destination.

The third was to enhance the educational programs and opportunities for the students attending the Gilpin County School.

The City was extremely confident that we had devised a way to meet the first and second objectives; however, we were not nearly as satisfied that the third objective would be borne out. Achieving the third objective required the school board and school administration to budget and appropriate the tax revenue where it would benefit the students, not the administration. The City Council was so concerned that this would not happen, that there was discussion whether the City Council should retain discretion over the funds acting as a shadow school board. However, in the end, the City Council decided to trust the School District.

Now a decade later we take an assessment of these three objectives and ask, “Was it worth it for the City of Black Hawk to forgo the use of this tax revenue for its investments, and instead invest in the Gilpin County School?”

On maintaining reasonable and responsible property taxes? Absolutely. The Gilpin RE-1 School District’s mill levy is under 8 mills, the lowest mill levy of any school district in the State of Colorado.

On securing a significant and sustainable revenue source that would increase as Black Hawk prospers? Absolutely. In 2009, the total Educational Enhancement Tax remitted to the school was $481,326. In 2018 the total was $978,811, the amount remitted per year doubled in less than 10 years. We are closing in on one million dollars annually, and this is without the Monarch Resort expansion being completed. It is entirely possible that when Black Hawk’s newest resort property fully opens, the annual remittance could exceed $1.2 million dollars.

On the final objective, enhancing the educational programs and opportunities for the students, perhaps this is the most impressive of all the achievements. The Gilpin County RE-1 School District is now accredited with distinction; the technology employed in the classrooms exceeds what many other schools in the state offer; and, full-day kindergarten has been in session for several years now. Let’s also not forget about the regulation football and track facilities added just last year. What the current and prior school boards and school administrators have accomplished with the opportunities afforded them through the Educational Enhancement Tax program is quite remarkable, exceeding even our highest expectations.

So, does the City of Black Hawk believe it was worth forging this agreement 10 years ago with the school and handing them what amounts to a check for eight million dollars – every last dollar of it! Today we renew our resolve to maintain and defend the Intergovernmental Agreement between the City of Black Hawk and The Gilpin County RE-1 School District and look forward to its numerous benefits for many, many more years to come.

END_OF_DOCUMENT_TOKEN_TO_BE_REPLACED

Where the dead get to tell their story By Jaclyn Schrock On Saturday, August 21, the Gilpin Historical Society held their annual Cemetery Crawl. Tickets allowed the shuttle of hundreds of guests from the Teller House parking lot to the Cemetery. Depending on v... END_OF_DOCUMENT_TOKEN_TO_BE_REPLACED